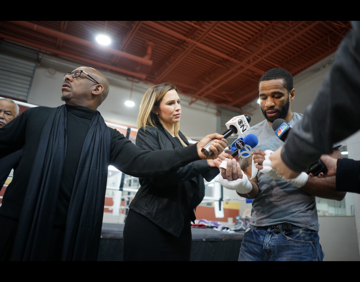 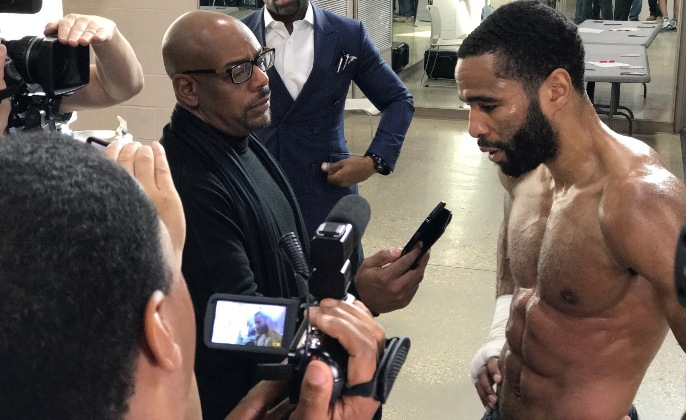 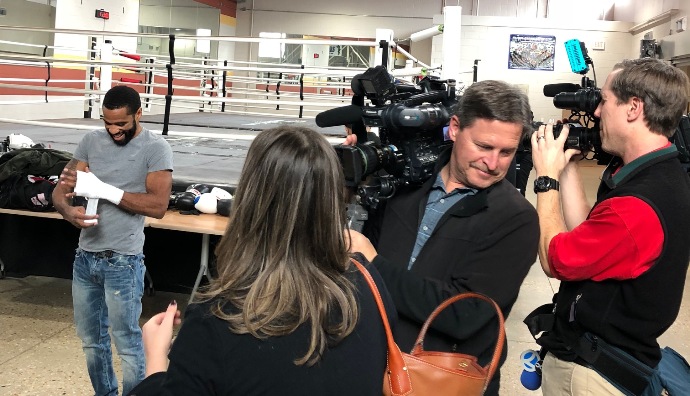 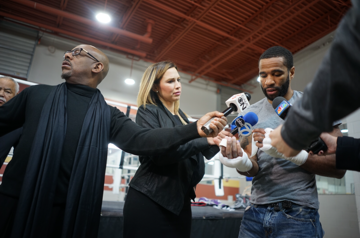 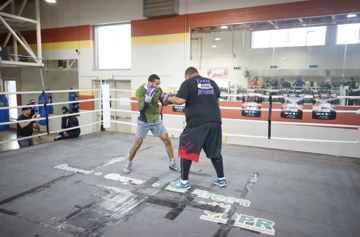 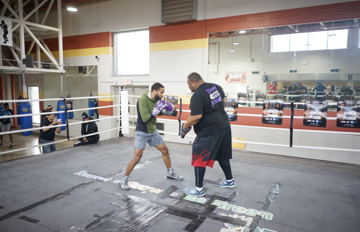 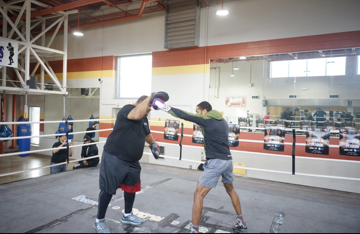 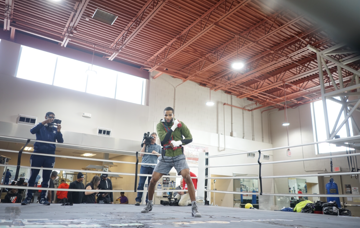 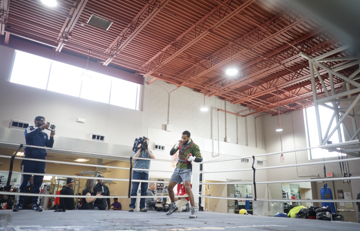 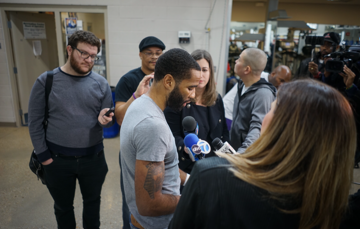 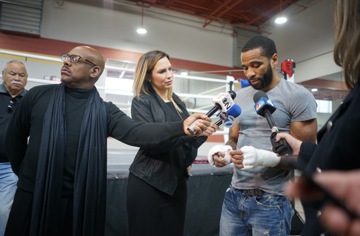 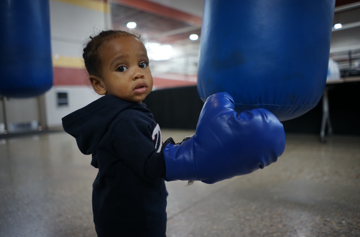 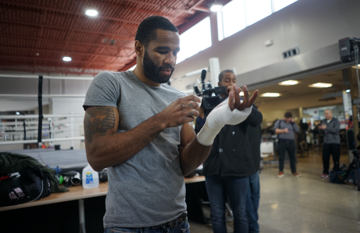 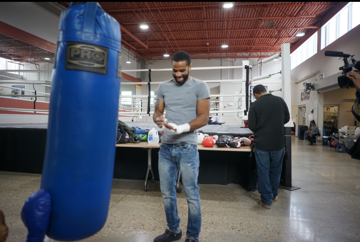 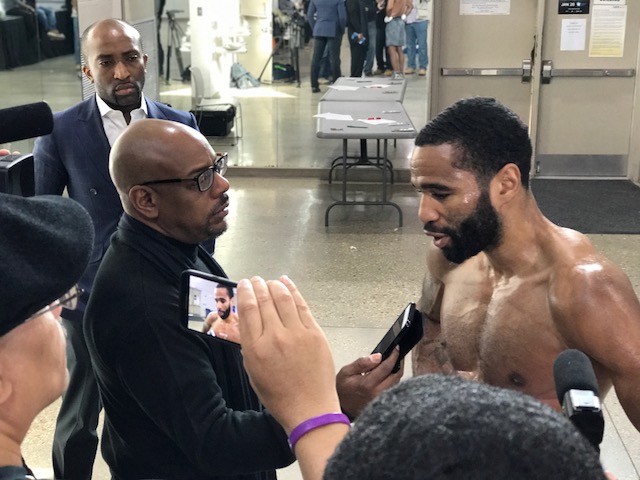 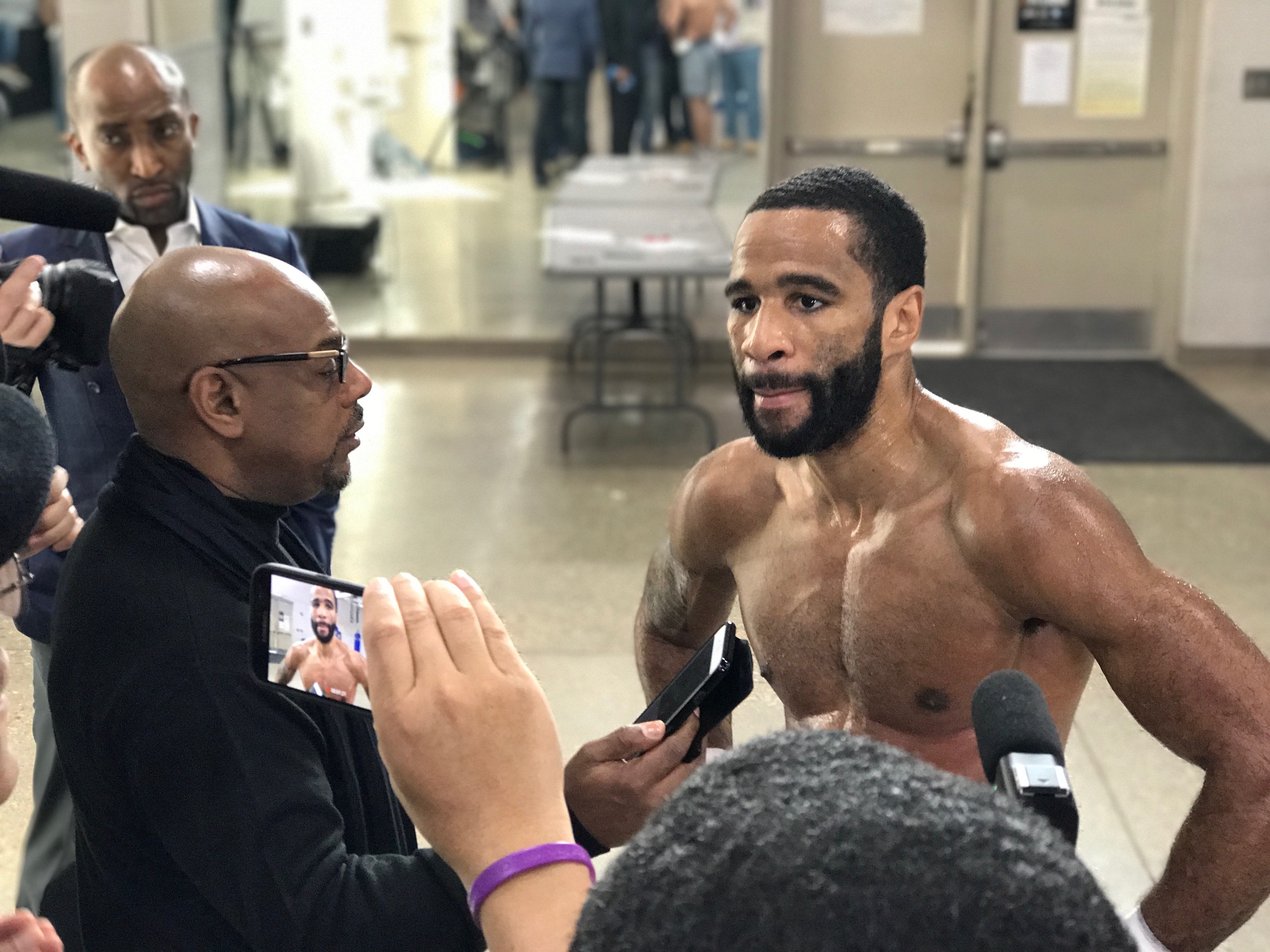 Tickets for the live event, which is promoted by DiBella Entertainment and TGB Promotions, are priced starting at $50, and are on sale now. Tickets can be purchased at ticketmaster.com, barclayscenter.com, at the American Express Box Office at Barclays Center or by calling 800-745-3000. Group discounts are available by calling 844-BKLYN-GP.
Also in attendance at the workout was Peterson’s brother, once-beaten contender
Anthony Peterson, who competes in undercard action on the January 20 event.
Here is what the workout participants had to say Thursday:
LAMONT PETERSON
“I feel great. I’m already close to weight. I’m happy and eating up to five times a day. I feel strong and I’m ready for this fight.
“I have to look at this as really just another big fight. When you’re at the top, you try not to make too much of each fight. We know what’s at stake. I know that when I keep it simple, that’s when I perform best.
“Right now my body feels better than ever. I’m comfortable with everything that’s gone on in camp and I think you can see it in my body.
“I’ve always trained hard since the first day I came here as a child. That’s been instilled in me since a young age and it’s carried me throughout my career.
“Everything I do is for D.C. I’m trying to get as much recognition for this area the best way I can. That’s what we all strive for in this gym. This is the biggest one that’s been on the schedule for a while and I’m ready to bring it home.
“It gets easier and easier the more championship fights I’m in. I was in shape for all of them, but I definitely put more pressure on myself when I was young. I’ve improved each time and now I feel like I’m really at the perfect place in my career.”
ANTHONY PETERSON
“I have to make a statement. I never feel comfortable with a decision. I think that’s a good thing because I have to be special under the bright lights.
“Everyone knows I like to go to the body. You know I’m going to make him work so you can look out for me to break my opponent down on the January 20.
“I’ve been sparring with a variety of experienced fighters over the last year and they’ve helped me out even while I haven’t had a fight. Ring rust is all mental. It’s up to you to put the work in.
“I haven’t gotten the fights that I want, but I’ll always stick to my game and stick to my craft. I know if I persevere, things will work out for me.
“I know that I love this sport. I know that eventually I will be a world champion. I believe in my future and I’m looking forward to big fights.
“It’s inspiring to watch Lamont do his thing and succeed. He’s going to beat Errol Spence, even if people don’t believe it. I think he’s going to take care of business.”
BARRY HUNTER, Peterson’s Trainer
“It’s been a long grind in camp for these guys. When I think back on how long we’ve been on this journey, I’m very proud of them. They were 9 and 10 when they first came into the gym.
“We don’t have the weight monster to deal with fighting at welterweight. Lamont is in a great place mentally and physically. I’m looking forward to an explosive fight.
“When you look at the Spence-Brook fight, early on Brook had a lot of success. Down the stretch Errol imposed his will and broke Brook down. I know Errol well and I’ve coached him. He has a strong will. He’s not great in one area, but he’s good in a lot of areas. This is a different kind of guy he’s facing. Heart is something Lamont is nowhere near short on. I think this might start off tactical, and then turn into a war.
“My job is to go in there with part of a plan, but it’s always about adjustments for us. Whatever Errol brings to the table, we’ll figure it out and put everything in motion.
“This last week is a lot of game plan and mental preparation work. A lot of fighters don’t train the mind. You have to train the mind even more so than the body. We have to be ready for every scenario.
“I think if Anthony goes in there and does his job there are a few vacant titles at 140-pounds and that’s a track for us. We want to get a strap around his waist and we’ll face anyone to get it.
“Lamont, along with Anthony, Gary Russell Jr., Jarrett Hurd and Gervonta Davis, have been holding down boxing in this area for a long time. It would be huge to bring this title home. There are a lot of young Lamont Petersons in this area who want to reach this level. It would be a beacon of light shining down and showing these people the way.”
# # #
For more information visit www.sho.com/sports , www.premierboxingchampions.com,
follow us on Twitter @ShowtimeBoxing, @PremierBoxing, @LouDiBella, @TGBPromotions, @BarclaysCenter, @Brooklyn_Boxing and @Swanson_Comm or become a fan on Facebook at www.Facebook.com/SHOBoxing, www.Facebook.com/barclayscenter,
and www.Facebook.com/DiBellaEntertainment. PBC is sponsored by Corona Extra, La Cerveza Mas Fina.
CONTACTS:
Swanson Communications: (202) 783-5500, contact@swansonpr.com
Andre Johnson; PR for Lamont Peterson: (202) 486-8072;andre.johnson@headbangerspromotions.com
Bernie Bahrmasel, DiBella Entertainment:(212) 947-2577
TGB Promotions: (818) 817-8001
Tim Smith, Premier Boxing Champions: timothy@haymonboxing.com
Chris DeBlasio, Showtime Networks Inc.: (212) 708-1633
Matt Donovan, Showtime Networks Inc.: (212) 708-1663
Flo Jocou, Showtime Networks Inc.: (212) 708-7319
Mandy Gutmann, BSE: (718) 942-9587
Stuart Bryan, BSE: (718) 942-9574
Steve Pratt, BZA PR for SHOWTIME: (310) 408-4555