Lamont Peterson beats Kendall Holt by TKO in eighth round 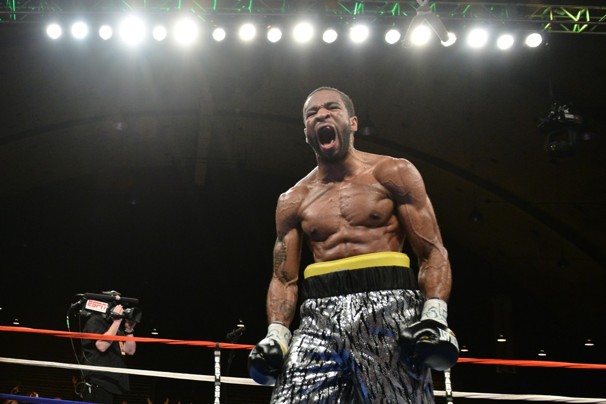 District native Lamont Peterson had waited more than a year to fight again. The International Boxing Federation 140-pound champion needed less than half an hour to complete a dismantling of Kendall Holt on Friday night at the D.C. Armory.

Peterson did his best work in the middle rounds following a slow start, and by the time referee Tony Weeks intervened at 1 minute 42 seconds of the eighth, Holt resembled little more than a punching bag. Peterson, meantime, served notice to his peers and the rest of the boxing world that he’s ready to continue his ascent to the highest levels of the sport.

After an uneventful first three rounds, Peterson brought the partisan crowd to its feet in the fourth after absorbing some body blows from Holt. As if those shots jarred him to attention, Peterson moved forward aggressively, working the body and landing upstairs when the opportunity arose.

“Of course I’m happy for the victory, but I was more happy that once again my city was behind me, supporting me,” Peterson said. “Just wanted to come out and put on a good performance, put on a good fight. From what I feel, it was a good fight.”

A right hand dropped Holt late in the fourth, and as soon as the challenger rose to his feet, Peterson continued the assault. Peterson rattled Holt with a left-right combination, and the former World Boxing Organization junior welterweight champion appeared headed to the canvas in short time, but the bell to end the round bailed him out.

Peterson’s most authoritative round before the knockout was the sixth, when he connected on 17 straight punches that had Holt dangling on the ropes. The final two, a left followed by powerful right, sent Holt to the mat again and compelled Peterson to scream to the partisan crowd. By then he was in complete control, and it was only a matter of which round he would win by knockout.

“I spent a lot energy to try to get him out,” said Peterson (31-1-1, 16 knockouts). “But I just had to settle down and let it come to me. I felt one of his shots, and it hit me on the button. I did not feel anything, so I knew I could put it together and get him out of there. I just had to be patient and wait for the time.”

Peterson’s 14-month layoff was the most protracted of his career. His last fight was also in the District, and the victory came in stunning fashion against heavily favored Amir Khan at the Walter E. Washington Convention Center Dec. 10, 2011.

After surviving an early flurry, the long shot who was homeless as a child before rising to championship contender never backed down to Khan through 12 rounds, and judges rewarded Peterson with the IBF and World Boxing Association belts by split decision.

Khan’s camp vehemently disputed the result, but after acrimonious negotiations between the sides, a rematch was set for May 19 in Las Vegas. Then less than two weeks before the bout, Peterson tested positive for a banned substance, setting into motion a sequence of events that kept his team focused primarily on restoring his reputation rather than actively searching for an opponent.

Although the WBA stripped Peterson of the belt, the IBF launched an investigation by retaining an independent physician who examined Peterson’s medical records. Peterson’s camp maintained throughout he had been taking soy-based testosterone to treat a medical condition, and the IBF’s findings supported that claim, allowing him to keep the title.

Retaining the championship belt allowed Peterson to dictate terms for this fight against Holt, and he was adamant about staging it at a venue near where he grew up in Southeast rather than Las Vegas or Atlantic City.

The boisterous crowd of 3.121 responded in kind, providing a deafening ovation as he approached the ring and later chanting Peterson’s name when it became clear he was in full command.

“I’m happy for the city,” Peterson’s trainer, Barry Hunter, said. “Any chance that we get to bring a fight of this caliber to the city, you can depend on us.”

Holt (28-6, 16 KOs) also was back in the ring after an extended layoff. The native of Paterson, N.J., last fought March 16, 2012, when he scored a second-round knockout of Tim Coleman in Cabazon, Calif.